Lawyer to Entrepreneur: When the Military Gives You Orders … Make Wine

Lawyer to Entrepreneur: When the Military Gives You Orders … Make Wine

Hoppin' Grapes Note: This article was originally posted to powerhouseplanning.com You can view the original post if you CLICK HERE! Re-posted with permission.

When Army wife Kristine Wolfe, a former attorney, found out she would be moving (again) on behalf of the military, she had every intention of continuing her law career. But the relocation to southern Arizona proved to include other plans for her. Like so many military spouse attorneys, the push to grant reciprocity is a slow-moving process, making it challenging to transition as a lawyer from duty station to duty station. So Kristine had another idea. 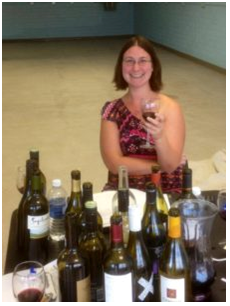 Sierra Vista, Arizona was severely lacking in a wine bar. With thousands of people rotating in and out of Fort Huachuca every four to six months, the area was void of a comfortable, chic, and fun place to hang out with friends while sampling spirits. Kristine, along with her husband Eric, solved that problem with some difficulties included in the journey of small business ownership.
Getting Started in a Tough Economy
Most of the challenges came from starting a new business, not particularly from the military standpoint. Sierra Vista is a hard area in which to get started; frequently, businesses start and wither within the first year. There is one restaurant building that has changed hands at least four times in the last three years. It is something about the economy that makes it really hard to build and grow a business.
“Sometimes I felt like I was getting a pat on the head,” Kristine said. “When that happened, I pulled out the lawyer card, and it stopped.” Eric is still active duty, and when the business launched he was a First Sergeant, so the majority of responsibility was on Kristine.
“Balancing the military and a business venture is nearly impossible,” Eric said, as he still works hard to find the balance. “And the only way it is possible is with a strong partner. Kristine is the strongest partner ever.”
Over the past two and a half years, Hoppin’ Grapes has been become a very well-known establishment in the military town. It plays host to farewell parties when friends are moving, crafting nights for local groups, and book clubs, and it usually has live music on the weekends. The “come on in and relax” atmosphere is so refreshing. The entrepreneur couple is all about people feeling at home in their bar. Couches and tables can be moved around to accommodate groups, customers can bring in their own food, and new friends are always welcome.
Word of Mouth
In fact, military spouses are spreading the word about “The Grape,” as it is affectionately called, to friends before they even move here. One military spouse stationed at Fort Huachuca heard about it from a friend at Fort Carson when she found out the next move was taking them to Arizona. “You just have to try out Hoppin’ Grapes,” the friend said. “It is the best place to relax and drink wine.”
Social media plays a big role in the business’ success, and while their official Facebook page and website attract visitors on a regular basis, it is really the word of mouth from unofficial spouses’ Facebook pages that spread the word. Inevitably a new spouse arrives in the small town and wants to know of a great place to go for a date night. Boom:  Hoppin’ Grapes is at the top of the list. Its location, atmosphere, and great selection of beer and wine make it the perfect place to get to know the community.
In February of 2016, Hoppin’ Grapes won the inaugural Business of the Month recognition from the city council. “Their business has become a highlight of the West End after setting up shop a little over two years ago,” the spokesperson for the City of Sierra Vista reported.

We are heavy on the "ish". If we are busy, we stay open later! If not, we might close early. Find our usual hours on our facebook page by clicking on the picture above. 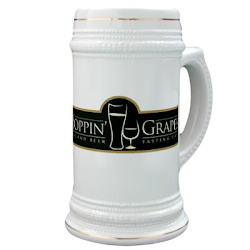 Hoppin' Grapes does not receive any form of compensation for our product reviews and blog posts, unless it is stated within that specific posting. Learn more about the FTC blog disclosure law and how it affects you, this blog, and online information. For more information Click Here!